Careful patient selection for this treatment is essential. 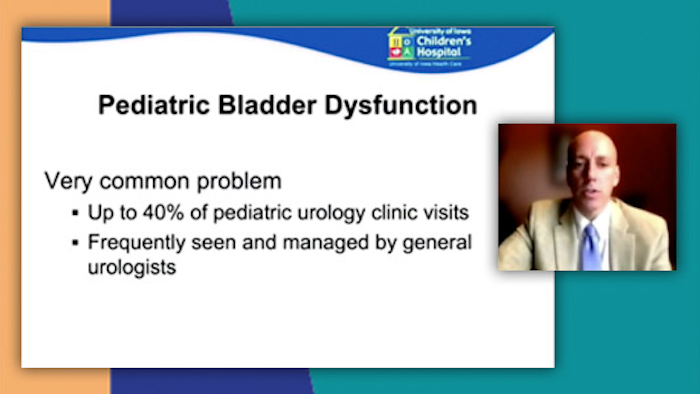 Seth A. Alpert, MD, a member of the Department of Pediatric Urology at Nationwide Children’s Hospital and a clinical associate professor of urology at The Ohio State University Wexner Medical Center, presented the case of a 9-year-old girl with a long history of urgency and frequency accompanied by both daytime and nighttime wetting and constipation.

“She’d tried many different anticholinergics in the past but had not shown significant improvement,” he said. “Like many of these children, she took MiraLAX® daily for constipation issues.”

Dr. Alpert said that after both a renal ultrasound and MRI came back clear, he discussed options with the family. They chose to treat her refractory voiding symptoms and history of constipation with sacral neuromodulation (SNM).

SNM is not approved for patients younger than 16 for either urinary or bowel control indications. That said, the off-label treatment has shown promise.

“In children, SNM is always a two-stage outpatient surgical treatment with a two-week trial period to look for over 50% improvement,” he said. “This particular patient had about an 80% improvement in her voiding symptoms at two weeks, so we moved forward.”

Eventually, with her permanent battery in place, the patient’s symptoms improved to nearly 95%,” Dr. Alpert said.

“Over time, she did quite well,” he said. “She’s been coming back to clinic about every six months or so for device interrogation. Four years later, she’s now 13, and it’s coming up on the lifecycle of the battery and it will be time for replacing the battery or doing a trial with the battery off for a year or two.”

Dr. Alpert said the takeaways from this case, as well as the supporting research, indicate that SNM is safe and effective for refractory non-neurogenic bladder and/or bowel dysfunction in pediatric patients.

Dr. Alpert said careful patient selection is essential, and most children with refractory overactive bladder symptoms will not qualify for treatment until they fail treatment with two or more anticholinergics.

“It is also important to note that SNM is not meant to be a permanent therapy,” he said. “You should consider device removal when there is no return of symptoms after a trial where the device is turned off for more than 6 months.”

She said UI has an increased association with eating disorder risk and low energy availability in female athletes.

“There is a high prevalence of UI in young female athletes, which is often incorrectly accepted as normal or unavoidable, she said. “The risk of eating disorders in female athletes with UI offers an opportunity for screening or partnering with primary care.

Israel Franco, MD, director of the Yale Medicine Pediatric Bladder and Continence Program, discussed the case of a 16-year-old male who presented with intermittent, ongoing pain in his groin that occurred 25 times a day, but only lasted “six to seven seconds.”

Dr. Franco said he discovered that the cause of the issue was bladder neck dysfunction, “which is only discernable by doing a uroflow with electromyography.”

“Many of these patients void with large volumes due to autonomic/sympathetic increased tone,” he said. “This leads to enlarged bladder capacity, bladder neck dysfunction, constipation and orthostatic dizziness. In addition, many patients have underlying attention deficit hyperactivity disorder, anxiety or depression, and correction of the condition is critical to seeing improvement.”